A third of the food produced globally is wasted. How come?

Do you know that subtle sadness who comes from discovering a rubbery, mouldy carrot in the back of your fridge? Wait a minute before tossing it away, and let’s think about how the carrot arrived there… 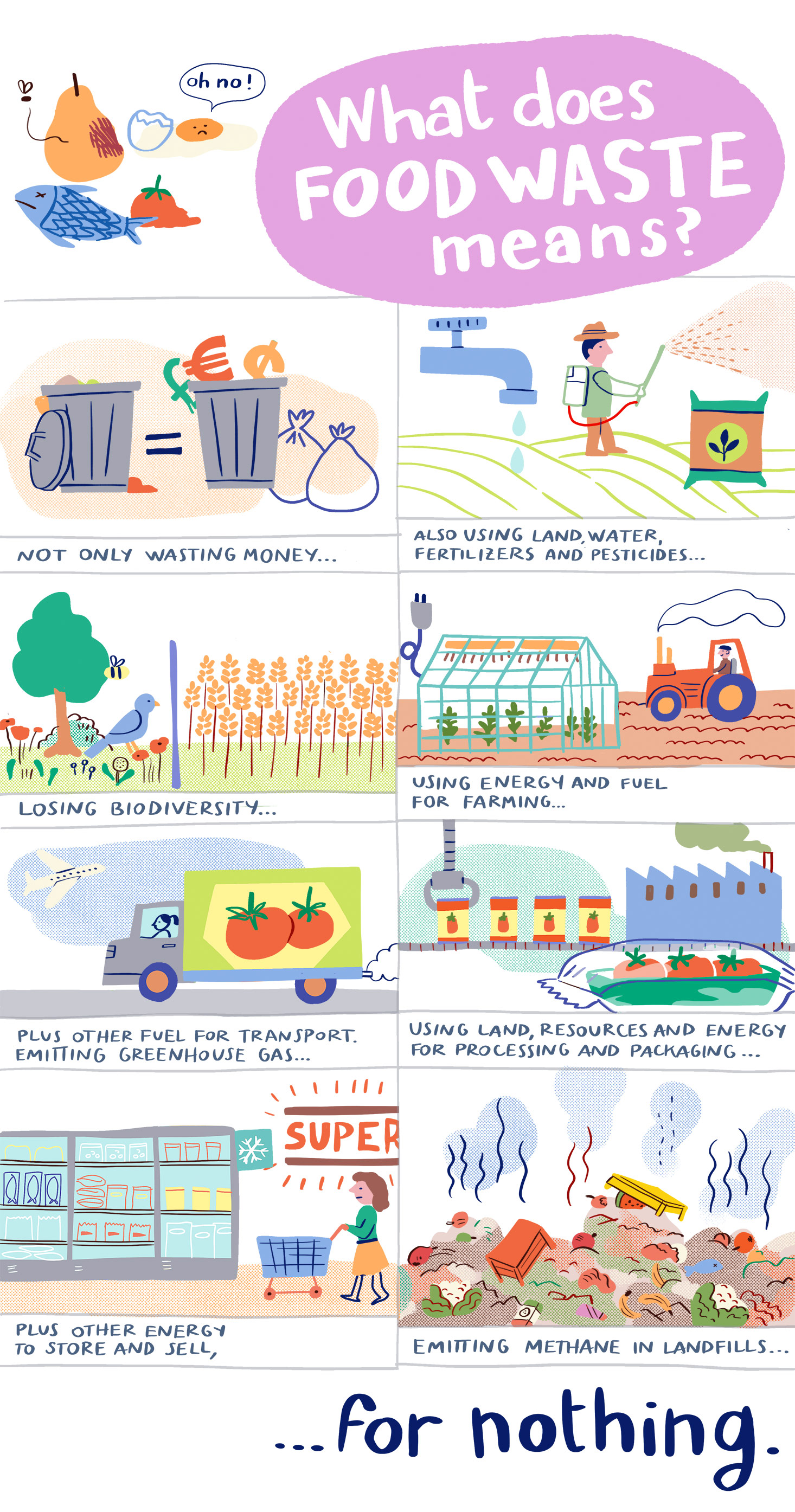 You can’t manage what you can’t measure

But let’s tackle one thing at a time. First of all, let’s start with data. Or better, with the lack of data.

Even if many scientific publications have examined the issue, there are still many differences and incoherences in the methods used to gather data about food waste. For example, the FAO makes a distinction between food losses, who happens from the moment of production until processing, and food waste, which is food appropriate for human consumption being discarded by distributors and consumers like you and me. Certains scientific studies count the inedible parts of food as food waste, others don’t. In some cases, wasted food transformed in animal feed or compost is counted as food waste; in others, that’s the opposite. That’s the reason why, at the moment, there is still no legal or universally accepted definition of “food waste”. This means that all the estimates and data available have to be taken with a certain margin of error. Anyway, one of the most relevant reports available is the one by FAO, dated 2011.

In European Union, FUSIONS – Food Use for Social Innovation by Optimising Waste Prevention Strategies, a 4-year project funded by EU Commission – has been working on providing a common method to harmonise the current definition within the 28 states of EU. According to FUSIONS, “Food waste is any food, and inedible parts of food, removed from the food supply chain to be recovered or disposed (including composted, crops ploughed in/not harvested, anaerobic digestion, bio-energy production, co-generation, incineration, disposal to sewer, landfill or discarded to sea)”. Drink and liquid waste, fish discarded to sea and waste of any materials that are ready for harvest, but which are not harvested, are included in this definition. FUSIONS also count inedible parts of food (e.g. skin, bones…).

Another important thing to know is that today, EU member countries are not legally required to provide reports on their food waste. In fact, at the time of its final report in 2016, FUSIONS made it clear that amongst the data gathered from the EU countries, only a fraction was of sufficient quality.

We lose food at every stage, from farm to table

Throwing away food, for any type of reason, it’s not just “a pity”, or a waste of money. It means above all that we have used natural resources and emitted greenhouses gases for nothing.

One thing is sure: when considering the entire lifecycle of a food product (remember the LCA?), the production step is the one with the largest impact on natural resources. Each of the following steps (handling, transport, processing, retail and consumption) adds another chunk to the total carbon footprint of a certain food. The further we go on the chain, the highest is the carbon footprint of a wasted product: a tomato discarded when it’s still at the farm will have a smaller impact of the same tomato thrown away from your home’s refrigerator.

We have just said that production accounts for the biggest part of food carbon footprint. So, if we follow the three R’s rule (reduce, reuse, recycle), the best option would be to avoid overproduction in the first place. But in agriculture, as you may imagine, it’s impossible to plan future harvest with absolute certainty: climate hazard, diseases, pests and price fluctuations are taken into account by farmers, who in general will tend to overproduce to counterbalance these risks. In addition, overproduction is often caused by fear of losing a contract with a buyer (because of insufficient quality or quantity at the moment of the harvest).

And here come the first food losses: if bad weather or diseases were not enough, a too low market price will result in leaving fruits and vegetables unharvested, rotting in the fields – because the farmer would not even cover his costs for harvesting. Prices fluctuations can also be related to safety warning: in 2008, a warning was issued by the American FDA (Food and Drug Administration) concerning possible salmonella contamination in tomatoes. The warning was eventually discovered to be unfounded, but in the meantime consumers had decreased their demand for tomatoes, resulting in around 30% of total U.S. tomato fields left unharvested.

Another cause of food waste at the production step is the application of cosmetic standards, classifying fruits and vegetables based on their size, colour, weight, blemish level and Brix – a measure of sugar content, used to judge the degree of ripeness of fruits. The ugly ones, in most cases, will not even leave the farm. 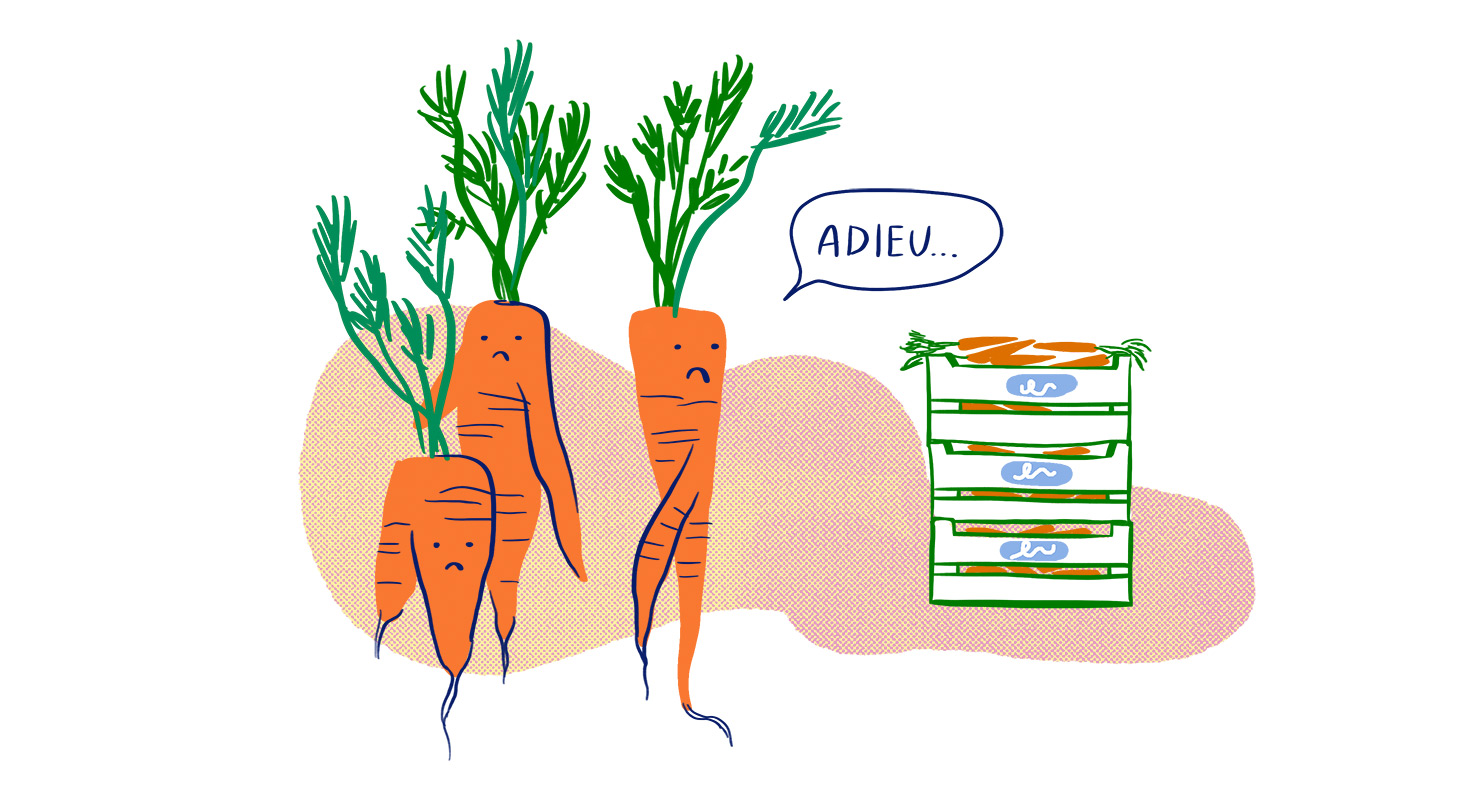 For fruits and vegetables, FAO estimated that 20% of the global production is lost at the farm level.

In livestock farming, even if the losses are fewer than for cereals or vegetables, a farmer may lose part of the animals because of diseases, as for example the swine fever who’s striking across Asia right now.

And what about fishing? Here the food losses take the form of bycatch. Simply put, all the species of fish that are caught by mistake (undersized, not the targeted species, etc) are thrown back overboard, already dead or dying. For some species, bycatch jumps up to incredible ratios as for shrimp-fishing by trawls: for 1 kg of shrimps caught in the net, there is 5 kg of unwanted fishes – or worse, endangered species like turtles or cetacean.

After the harvest, especially in developing regions, the lack of proper storage facilities, along with unreliable electricity supply for refrigeration, lead to important amounts of food losses. For example, packing a load of tomatoes too tightly in a very big wooden crate (instead of many smaller ones), then transporting them to the market on a bumpy road it’s enough to accelerate their path to become waste.  For cereals like rice, typically stored for months, dangers come from moisture, rodents and insects. In such cases, just switching the type of bags used can make a huge difference.

Not all food gets processed or transformed, but a good part of it does. Cutting, trimming, packaging, canning, transforming fresh tomatoes in bottled tomato sauce, pasteurizing milk to make it last longer… During this phase, food starts to look closer to the thing we buy every day. If in developed countries food losses are related to dysfunctions or accidents at the processing factories, on the other side the lack of processing facilities leads to food waste in developing countries, especially for fruits with a very short season.

Do you know anyone owning a fig tree, for example? In the space of a little month, a single tree can produce so many figs that it’s impossible to keep up. At a certain point, you need to transform them in jam or other types of preserves, or they’ll all be too ripe and eventually fall on the ground and rot. But would you buy a new kitchen stove, pans and tools just to make fig preserves? Well, no. Same goes for processing facilities: it makes no sense, financially, to invest in a factory who will be used only 1-2 months a year. The use of dehydration techniques (both in sunlight or in solar-powered dryers) seems to be an effective and cheap solution to reduce post-harvest food losses in developing countries.

Another challenge comes from food packaging: in some cases, unnecessary packaging is total nonsense in term of environmental impact, like bottled water in countries where tap water is safe to drink. On the other side, packaging and processing technologies play an essential role in extending food’s shelf life: think canning, vacuum packing, or new solutions like these ethylene-absorbing packagings (ethylene is the gaseous compound, produced by fruits and vegetables, who causes their ripening after the harvest). So, in a way, packaging is both parts of the problem and of the solution.

We are nearly at the end of the path. At this time, our food has already travelled a lot: after transformation and processing, it arrives at the market, store or supermarket. The first supermarket, King Kullen, was created in New York in 1930, by Michael J. Cullen, based on the idea of selling cheaper food thanks to economies of scale.

It turned out to be a great idea since most of today’s food purchases in developed countries are made at supermarkets. Over the last 60 years, their success contributed to the economic boom, accompanied social transformations (amongst others: women condition), lowered families’ food budgets and got us used to see loads of food, always fresh, always available, piled up in big amounts. Empty shelves look suspicious and a bit awkward, right?

Now look at the following graph, based on the 2011 FAO research: 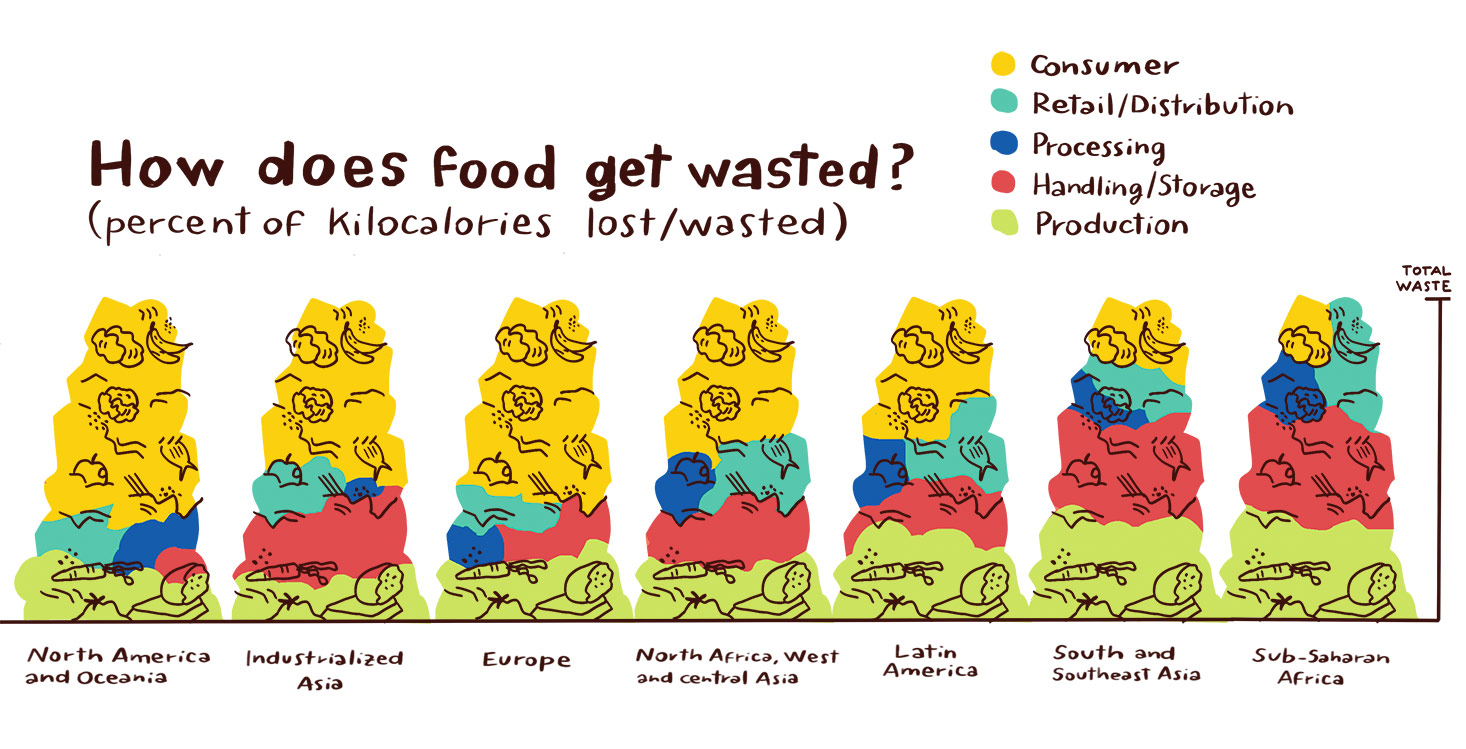 Despite the margins of errors, a pattern is clearly visible in all researches: in developed countries, around 50% of the food wastage happens at consumers level. In other words, that’s us! On the opposite, developing countries lose most of their food during production or shortly after.

With nearly 24/7 access to cheap food (compared to the past), it’s difficult to keep in mind the real cost of this wastage. We are at the end of a very long and complex food supply chain, and since half of the global population lives in urban areas, we have lost contact with the reality of farming, fishing and producing food. We can afford to waste it: in 1960, the average French family spent 38% of its budget to shop for groceries, in 2007 this percentage had shrunk to 21%. Researches showed also that around 20% of domestic food waste is due to misunderstandings in reading food labels and dates (the “best before” and ”use by”). For this reason, various initiatives and proposals are being discussed in EU countries, aimed at reforming date labels.

This post is part of a series of three about food waste: the next will focus on legislations – what are governments making to fight food waste?–, initiatives at companies’ level and solutions to treat food when it’s already become waste.

Previous Ten things to watch this summer to learn something new
We use cookies to ensure that we give you the best experience on our website. If you continue to use this site we will assume that you are happy with it.OkNoRead more