I’ve decided to start with an article about chocolate, partly because Easter is near, but also because I feel that it’s not often mentioned in the discussions regarding food sustainability (I’m speaking from my perception, but I’m looking forward to hear your comments). I’ve done my research based on the sources linked at the end of the post. I hope you will find it helpful!

1. How is chocolate made?

It all starts with cocoa trees and their fruits, cocoa pods. Cocoa trees grow under a roof of higher trees which provide shade and humidity. Twice a year, cacao pods are manually harvested from trees and opened; inside each pod there are around 40 cocoa beans, recovered by a white and tangy mucilage. Farmers will put the beans in wooden boxes to start the fermentation, which takes some days: this is a delicate phase where the farmer’s skills are essential to achieve good results. To stop fermentation, beans are dried under the sunlight and packed in large bags, ready to be sold to local cooperatives then shipped (mostly by boat) to international traders/grinders such as Cargill or Barry Callebaut, in Europe and US. Beans are then roasted, their shell is discarded leaving just the internal nib. The nibs are ground to a smooth paste, the cocoa mass. Cocoa mass can be sold as it is to manufacturers, but also being separated in cocoa butter and cocoa powder. These three basic ingredients –mass, butter, powder – are bought by manufacturers (from large multinational firms to small artisanal chocolatiers) and combined in different percentages with sugar, sometimes other vegetal fats, milk powder (for milk chocolate) and emulsifiers, to create differents type of chocolate. The mix of ingredients passes through conching, a process who involves heating and mixing for several hours until the mix is perfectly smooth and glossy. The “melt in your mouth” sensation is due to conching. After the tempering (bringing the mass to a specific temperature so that the cocoa butter will crystallize in a homogeneous way), chocolate is poured into molds where it will quickly harden and take the form that we all know.

2. Where does it come from? 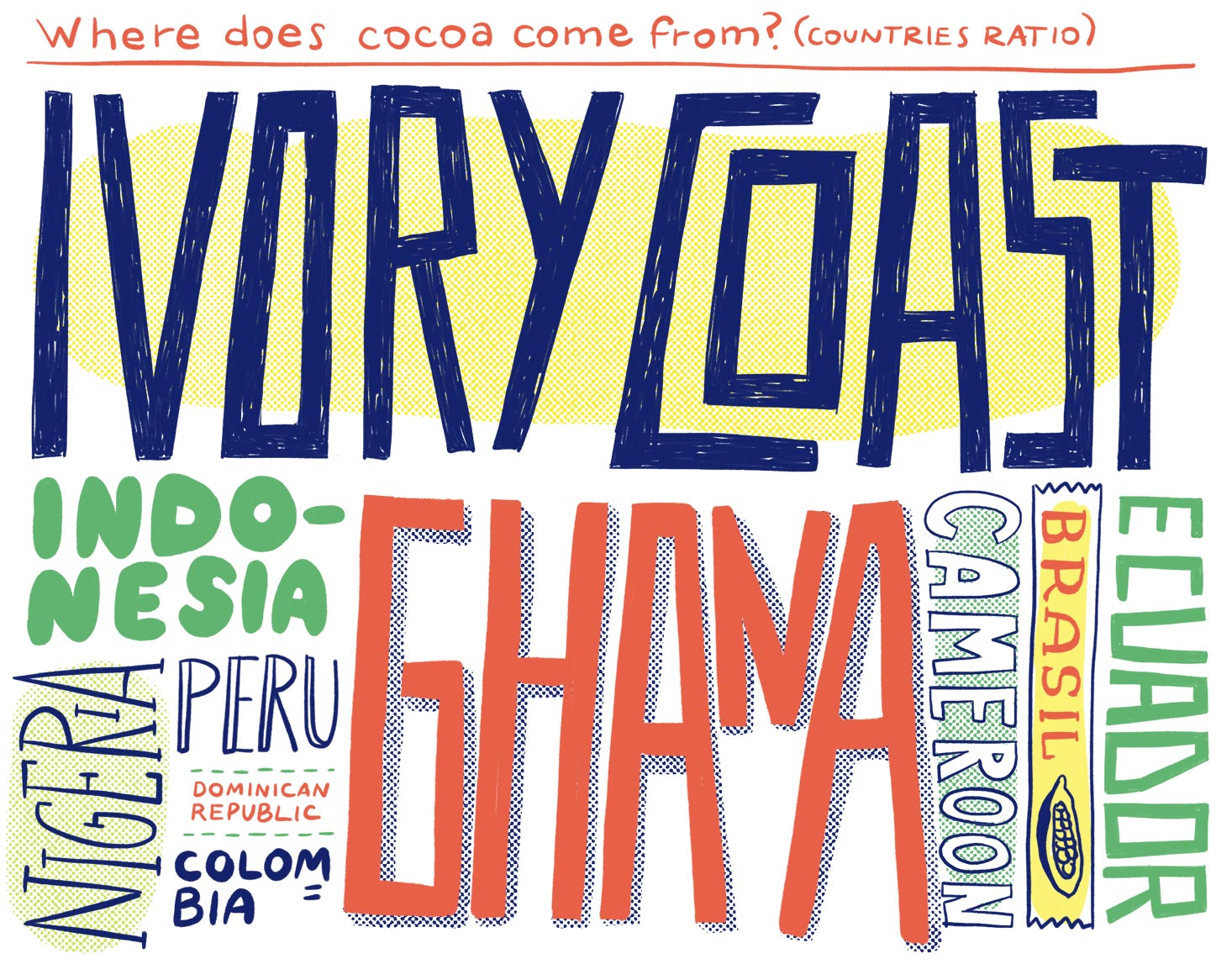 Global chocolate sales have known a slow but steady growth for twenty years, but this has been profitable only to the biggest players of the production chain. In fact, there is an increasing concentration in the market. As a result of mergers and acquisitions of smaller groups, only eight traders/grinders control approximately three-quarters of the worldwide cocoa trade, and they have started to expand also vertically in the chain, becoming sometimes also manufacturers. The six biggest global manufacturers (Mars Inc., Ferrero, Mondelez, Meiji, Hershey and Nestlé) own around 40% of the market share. Price fluctuations, as the one occurred at the end of 2016, have a strong impact mostly on farmers, which are not regrouped in organizations and have very little power in negotiations, compared to buyers and traders. The current farmer average income, in Ivory Coast, is $0.78 (opposed to a calculated living income of $2.50). Child labor remains at very high levels, with an estimated 2.1 million children working in cocoa farms in the Ivory Coast and Ghana alone. Child labour is due to a combination of causes, including structural poverty and a lack of schools and other basic infrastructure. Local institutions, like the COCOBOD in Ghana, play a role in supervising and fixing the cocoa price once a year, but they face recurring lawsuits for corruption amongst their members. 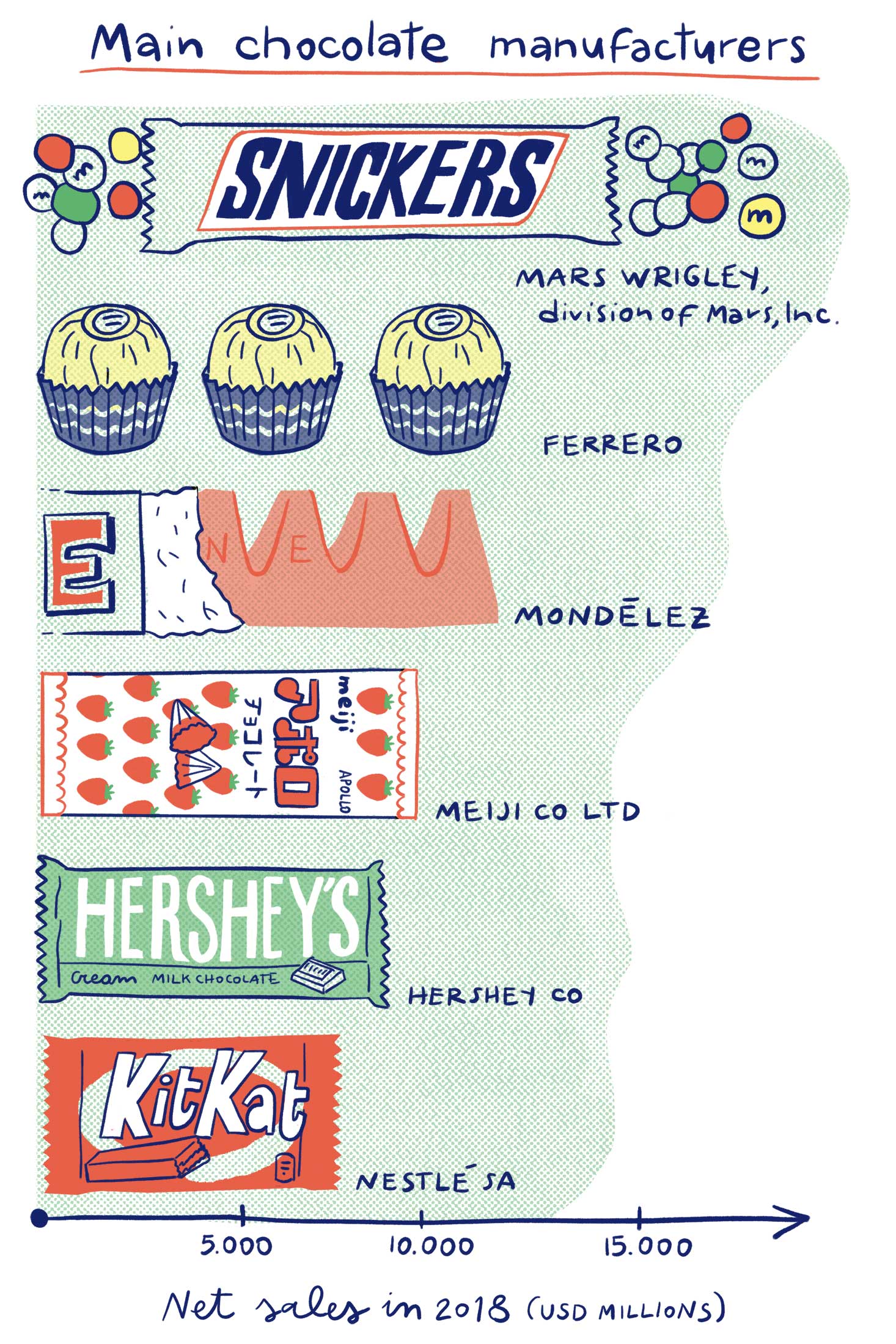 Cacao plants grow only in a tropical rainforest climate, a small climatic area within 20 degrees latitude north and south of the Equator, where temperature, rain and humidity remain constant during the year. By 2050, the higher temperatures expected will not be accompanied by the same increase in rainfall (especially in Ivory Coast and Ghana), so plants will not have the necessary amount of humidity to develop. This could push farmers to move their farms at higher altitudes, on hills around 500 meters above sea level, with a negative impact on deforestation (between 1990 and 2015, Ivory Coast has already lost around 80% of its forest). At the same time, deforestation is amongst the causes of global warming, so this leads to a sort of vicious circle. A possible solution would be the massive diffusion of agroforestry: this system, in opposition to cocoa monoculture grown in full sun, preserve a part of the forest’s higher trees which provide shade and humidity to cocoa trees. In addition, it avoids soil’s degradation and increases cacao resistance against pests and adverse weather conditions.

Rainforest Alliance (recently merged with UTZ) and Fairtrade are the two main certifications for cocoa farming. Fairtrade’s standards aim to empower farmers, giving them a guaranteed price for their products, thus protecting them from price fluctuations. Rainforest Alliance certification focuses on how farms are managed, with certification being awarded to farms that meet the comprehensive standards of the Sustainable Agriculture Standard. Rainforest Alliance provides training to teach farmworkers and their families to farm efficiently and responsibly. As an alternative to certifications, many manufacturers have created their own internal policies or sustainability programs (such as Mondelēz’s Cocoa Life program), but since their standards are self-defined and the results are self-checked, the reliability and transparency of these programs can legitimately raise some doubt. Plus, certifications (both global certifications and in-house programs) are still failing at taking into account the farmers’ living income as a key indicator for their standards.

My point of view

Living in France, I have access to an enormous variety of high-quality chocolate retailers and brands. Chocolate is everywhere in French gastronomic culture, and honestly, I know very little people who don’t like it. I buy mostly dark chocolate (in bulk to cook my own desserts) and from time to time I like to taste single-origins bars as a special treat. While I’ve started around 10 years ago to pay attention to the seasonality and origin of fruit and vegetables that I buy, or to avoid over-packaged food, or to eat less meat, I’m realizing that I was taking chocolate for granted.

We – West-Europeans and Americans – have been eating chocolate for so long that we’ve completely lost of sight the complexity of its production chain. Even when we buy high-quality chocolate from recognized chocolatiers, we tend to focus on the taste, we celebrate the creativity of chefs, but still, we have access to very little information about the raw material behind our shiny chocolate boxes (besides the little percentage of bean-to-bar brands).

I think we could move a step further if the same consciousness which has arisen during these last years around fast fashion or meat consumption, could also start to touch the exotic products that we enjoy daily (coffee, tea, chocolate).

I’m not saying that I’ll stop eating chocolate altogether. But I’ll surely investigate more on bean-to-bar and certified brands: those I’ve tried until now weren’t available in bulk, or I wasn’t satisfied with the taste (too sweet, or lacking aromatic complexity). I will start to ask to my favorite French brands if they have an internal policy of traceability for their chocolate. As painful as it is, it’s maybe time to start looking at chocolate in a different way: a luxury commodity, something to reserve for special occasions, like all other exotic fruits.

We use cookies to ensure that we give you the best experience on our website. If you continue to use this site we will assume that you are happy with it.OkNoRead more